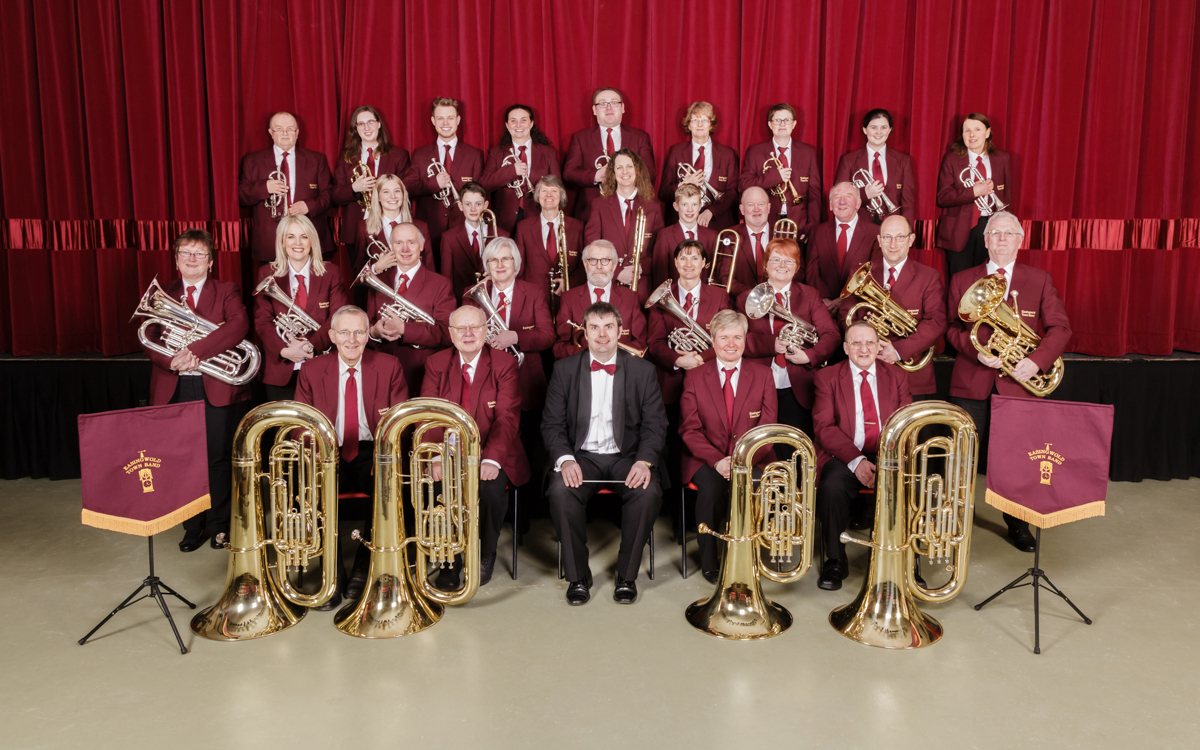 We're currently graded as a 4th-section band.  Some of our players have long experience of brass banding, others are less experienced. We enjoy making music together and playing for audiences locally and further afield, with one or two contests added to the mix to keep us on our toes. .

In March 2020 we won our section at the North of England Regional Brass Band Championships held in Durham, earning ourselves an invitation to take part in the postponed National Finals at Cheltenham Racecourse in September 2021. We came a modest 12th out of 14 bands -- a significant achievement after 18 months of almost complete shutdown on account of the Covid-19 epidemic. Since then we've been able to resume live rehearsals. We have several Christmas gigs in prospect -- pandemic permitting, of course. The North of England Regional Contest is scheduled for March 2022, with Spring and Summer engagements to follow. . .

Is there a minimum standard for players?

The Town Band, which rehearses on Monday evenings throughout the year, welcomes players who have reached approximately Grade 4 standard.

We run a Beginners' Group and a Development Band which rehearse on Friday evenings during school term-time, and we also offer very affordable 1-to-1 tuition.  We can't promise to teach you to play a brass instrument from scratch, but we'll give you every encouragement to learn. If you don't read music, that's no problem; we'll teach you to do that too.

Our aim is to provide a friendly and supportive environment in which you can develop your playing. If you don't possess your own instrument, the band has instruments available on free loan. Provided you are prepared to practise, you'll soon find that you can enjoy making a useful contribution to the group's sound.

The Band owns its bandroom in Croft Close, Easingwold (postcode YO61 3DB).  We've made it into a pleasant and welcoming place for rehearsals. There is parking in the road outside, and the public car park behind Easingwold's excellent Galtres Community Community Centre is only a few yards away.

How long has Easingwold Town Band been going?

The earliest reference in our possession to the existence of a brass band in the town is a newspaper report of 1838.  A town band has existed in various forms from that year onwards.  As a standard British-style brass band, Easingwold Town Band has been in continuous existence since 1901.

Town Bands have existed in Europe and Britain since medieval times. With stringed, woodwind, brass and percussion instruments, they were an important part of civic and religious ceremonies and celebrations.

Modern brass instruments with valves were invented in the early 19th century. Adolphe Sax, of saxophone fame, also developed the 'saxhorn' family of brass instruments which, along with the trombone, make up the standard British brass band — cornet, flugelhorn, tenor & baritone horns, euphonium and tuba. Drums, cymbals and other percussion instruments are also employed. Popularised by the demonstration of saxhorns' capabilities at the Great Exhibition of 1851 at the Crystal Palace, London, brass banding spread throughout the country, with many bands formed by miners and factory workers, as well as the armed services and of course the Salvation Army.