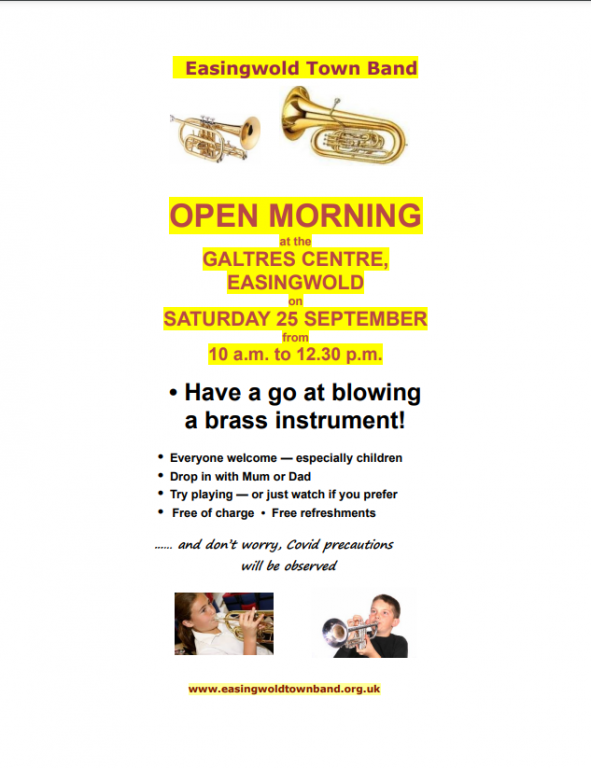 Here is the poster for the event

Our 'Open Morning' at the Galtres Centre will be in Kurt's Bar, just a few yards from Easingwold Market Place. It's all very informal, so come right in, whatever's going on. We'll have several 'P-Buzz' instruments for children to have a go at playing -- with Covid precautions, of course. Players from the Town Band will be there too, to demonstrate their instruments.

Proms in the Playground

Gearing up for the National Finals
The Band will end its involuntary 18-month silence on Sunday 12 September with a free ‘Celebration Concert’ at the Galtres Centre. This will be our ‘dress rehearsal’ for the postponed National Brass Band Championship Finals in Cheltenham on 19 September, following our win at the North of England 4th section Regional Contest in Durham on 14 March 2020. Lockdown descended on us the following day and put paid to celebrations of any kind. Now that we can – at last – celebrate our success, we invite our loyal supporters to come and join us in doing so. Our concert programme will include ‘An Elgar Portrait’ by Dan Price, the test piece for the Cheltenham contest. It’s also our first and long awaited opportunity to give a public performance of ‘Neverland’, a musical interpretation of the Peter Pan story by Christopher Bond – the piece we won with in Durham. After missing two whole seasons of summer bandstand performances in Memorial Park, and other gigs locally and further afield, we’re working hard on the Cheltenham test piece as well as reviving and expanding our pre-pandemic repertoire. Come to the concert and wish us well for our first appearance in the National Championship Finals in the Band’s 120-year history. Tickets are available from the Galtres Centre booking office (Tel: 01347 822472, Mon-Fri, 9-5). Pandemic restrictions currently limit us to an audience of 100 (50% of theatre capacity), so early booking is advisable.
‘Proms in the Playground’
In July a small group of us took part in ‘Proms in the Playground’, an event promoted by Brass Bands England for primary schools throughout the country. Real live music in school once again, after so long! At Alne, Brafferton, Easingwold, Huby, Husthwaite and Stillington primary schools, we were welcomed enthusiastically on three successive Fridays by our young audiences and their teachers, for a 20-minute performance of short pieces, mostly familiar to the children, in a range of styles that included lively film songs, jazz swing and a solemn hymn tune. Although our drummer could not join our group on a Friday (being at secondary school herself), that proved to be no problem at all: the children clapped and stamped to the music’s beat in fine style. After we’d played, there was enough time for brief answers to eager questions: how long does it take to learn to play a brass instrument? Is a cornet like a trumpet? How much does a tuba weigh? Unfortunately, pandemic precautions ruled out a closer acquaintance with the instruments we’d been playing. We’ll be better able to satisfy such interest and curiosity at our ‘Open Morning’ at the Galtres Centre on Saturday 25 September, when youngsters and their parents will be able to find out more about our Beginners’ Group; and perhaps even to take home an instrument on trial, to see if they’d like to learn to become brass players themselves.